On the 10th of February, women were brutally attacked by the police for daring to ask for better working conditions and a liveable wage. During two consecutive days, the National Society of Industrial Parks (SONAPI) brutally responded to a crowd of predominantly female workers because of their demand of 1,500 Haitian Gourdes ($14.53 USD) for a full day of work. The current salary is 550 Haitian gourdes ($5.33 USD) for a twelve hour work day. That is about .60 cents an hour. The workers were demanding less than $2.00 USD an hour, when they were met with live ammunition from the Haitian National Police (PNH) under the command of Frantz Elbé.We were happy to learn from journalist Herve Noel that citizen Minalda Pierre from Building 51 in DMS at SONAPI isn’t dead, but we are awaiting an update on the condition of her unborn baby. 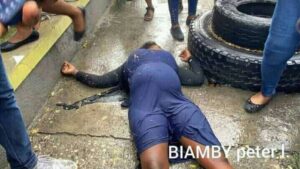